Last weekend brought much comedy to campus, courtesy students participating in improv this semester. On Friday night, Berkshire hosted the second annual Say Yes Fest, an improv festival in collaboration with Millbrook School, and on Sunday evening students performed in the Berkshire Hall atrium as part of their final exam. 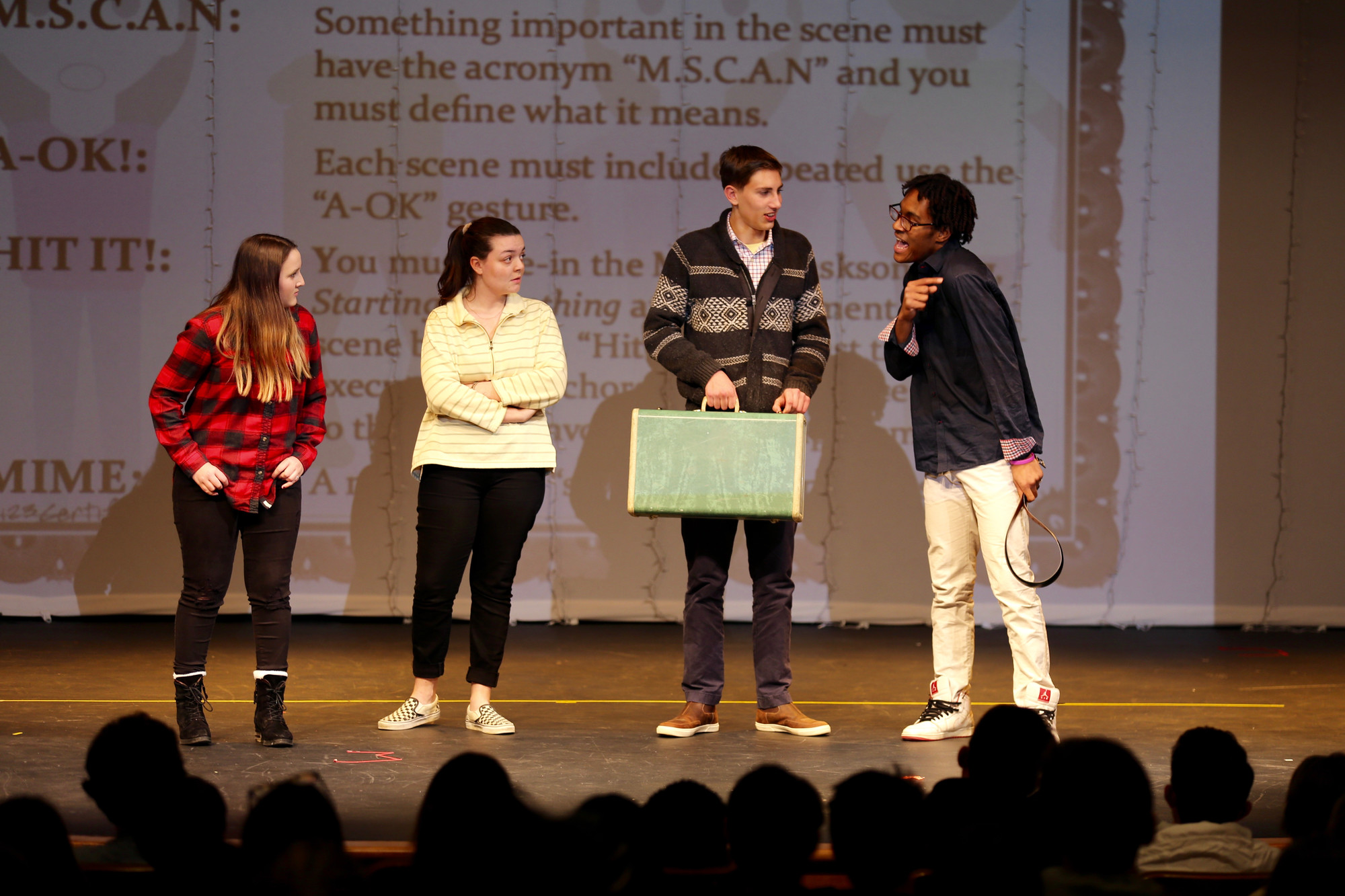 The Say Yes Fest came about when Theater Director Jesse Howard, who teaches two sections of improv, met Millbrook's Director of Theater Elaine Lifter at the Independent School Arts Instructors Association conference in 2014. "We connected over a shared set of values around teaching theater and began meeting to support each other's teaching efforts," Mr. Howard explained. "We decided it would be fun to get our classes together, and after two successful visits, realized that we had the makings of an improv festival. The goal from the get-go was to bring our two schools together in collaboration, not competition. The mission is, by design, about students from both schools doing improv together."

Allen Theater was abuzz on Friday as students from both schools filled the audience. The performance was to be an "improv charette," a form designed by Mr. Howard in which groups are given five predetermined, random variables around which to build a scene, and have about 15 minutes to devise a structure that incorporates them. At this year's festival, variables included incorporating a dance routine to Michael Jackson's Wanna Be Startin' Somethin' and featuring a mime who had to "save the day" in each scene. Although students are given time to prepare, "this is still improv at its best," said Mr. Howard. "The best moments come from unexpected twists and turns that happen during the live performance."

Collaboration with students from another school is a lot of fun, but it also helps students push themselves even further. They must lean heavily on what they have learned in class and then rely on improv's built-in set of rules or "agreements," as Mr. Howard calls them. "Students get to come up against ideas, approaches, and personalities they are not used to," he said. "It's great to get into a group of new people and be able to trust that those agreements are already there. It's a look outside of themselves, and it also reflects something useful back."

Logan Renneker '20, who was a member of the winning student group which also included Bianca Arredondo '19 and two Millbrook students, was quick to give credit to his scene partners for their win. "All three were open and receptive to bouncing ideas around," said Renneker. "We talked out the specifics of the scene, holding back no details. From then on, it was off to the races for us!"

Sunday night's 75-minute BIMP performance featured a series of fun, crazy, and irreverent improv games in which students demonstrated their mastery of the material as part of their final exam. The games showcased the students' wit and mental agility as well as their physical humor, as performers put a special exclamation point on a weekend of often hilarious performances. Veterans and newcomers alike exhibited an impressive understanding of the acting genre known to develop communication skills, problem-solving, and teamwork.

As Mr. Howard explains, improv begins with taking the enormous risk of putting oneself out there and can teach us what lies beyond the anxiety. "Once you face that fear, the realization is an ironic one: If you behave with confidence, you will feel more confident. The behaviors of confidence can be learned and practiced. And once those are applied to a performance, a light bulb goes off that says, 'Oh! The more comfortable I am making a fool of myself, the less of a fool I appear to be.' When you experience that firsthand, it translates to everything from in-class presentations and public speaking to social interactions and relationships." Certainly a benefit that will stay with students for life.